A BEAM interactive projector system installation was revealed on New Year’s Day at the Children’s Museum of La Crosse. Located in downtown La Crosse, Wisconsin, the motto of this is “learning and fun rolled into one.”  It is the first hands-on learning environment for children in the region and features three floors of hands-on exhibits.  More information about the Children’s Museum of La Crosse can be found at http://www.funmuseum.org. 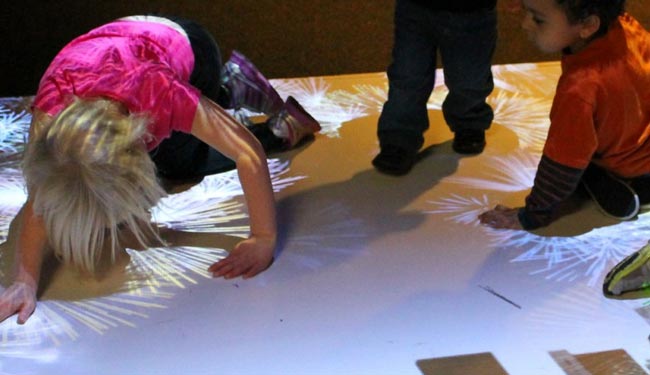 The Children’s Museum of La Crosse is like an all-you-can-eat buffet of play and discovery, with exhibits that speak to kids of all age (and adults too!)

One of Children’s Museum of La Crosse‘s missions is to assist the young ones to grow and learn through interactive playgrounds.  Exhibits include everything from a climbing wall and operable kid’s crane to a giant pin screen and kid sized convenience store.  The BEAM is currently located on the first floor of the museum.

Children can engage in motion-activated games using their whole bodies within the virtual playground. Children’s Museum of La Crosse Executive Director Anne Snow explained, “What steered us to the BEAM is the fact that it is very hands on interactive, and multiple kids can use it at the same time.”

Historically, Children’s Museum of La Crosse has shied away from technology exhibits because they tend to be breakable and are often not hands-on in nature.  However, due to its virtual element, it is not possible for children to break the system.  Further, it doesn’t require ongoing maintenance or supervision by a museum employee.  These were all elements that made the system attractive to Snow and her staff.

Shortly after the exhibit’s opening, Anne Snow watched a girl with a wheelchair playing the BEAM fireworks game. The girl was shy at the beginning but after a few minutes she rolled out onto the floor and began to interact with the BEAM System.

Anne adds, “It has exceeded our expectations in every way.  The visitors love it and the fact that multiple kids can use it at the same time is fantastic.  The icing on the cake was seeing a girl with special needs playing on the BEAM interactive floor.”

BEAM interactive games system is an award-winning interactive projection game system that instantly enhances the customer experience at your business with endless fun, excitement, entertainment and engagement. For more information about the BEAM system and how it can help make the difference in your waiting room, contact the BEAM Team today!